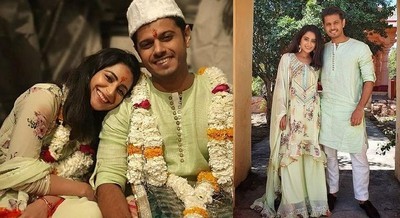 Star Plus most popular and trending serial Ghum Hai Kisi Ke Pyaar Mein fame Neil Bhatt and Aishwarya Sharma are dating each other.

Further it comes as a grand surprise where the duo have finally made their relationship official by sharing their Roka Ceremony pictures on social media.

None of us expected that the duo were dating each other.

But on a good note the duo made it official very soon where earlier only rumors used to do the round and after the show used to go off-air the affair also used to blow away.

Neil Bhatt mentioned in his social handle From the madness, to the fun, and all the love that bloomed, for a lifetime we became one.

Check out the latest pictures of Neil Bhatt aka Virat and Aishwarya Sharma aka Pakhi.

On professional front the duo are playing the role of Devar and Bhabhi with a gist of love interest too.

We congratulate Neil Bhatt and Aishwarya Sharma for their best future together.

GHKKPM: Ashwini gets ferocious for Sayi to shut Bhavani's mouth