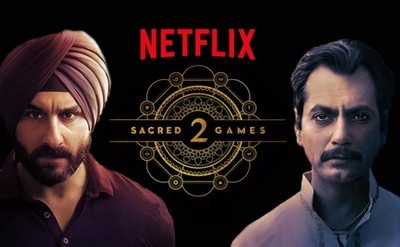 One of the most popular and most awaited Netflix Web Series Sacred Games is soon going to hit the screens for its Second Season.

The epic performances of Radhika Apte, Nawazuddin Siddiqui, Saif Ali Khan and others, the show grabbed millions of viewers and lot of praises.

The Second Season of Sacred Games will stream from the end of July or during the first week of August.

The twist of Sacred Games Season 2 is that this time the content is not up to the mark.

Netflix is going through it again and this is the reason why there is delay.

The show Sacred Games 2 is shot in abroad locations including Cape Town apart from India.

The Second Season will show Sartaj Singh (Saif Ali Khan) pursuing his relentless battle of saving the city and Ganesh Gaitonde (Nawazuddin Siddiqui) facing bigger challenges to retain his position as the legendary the kingpin of Mumbai.

Guruji (Pankaj Tripathi) is Season 1 of Sacred Games as Gaitonde’s Third Father will play a pivotal role in unfolding the mysteries of events in Season 2.