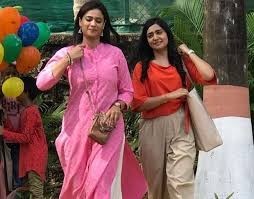 Sony Entertainment Television is coming up with all new show Mere Dad Ki Dulhan which is going to be different concept.

Amber aka Varun Badola is a single parent to daughter Nia, Nia aka Anjali Tatari is an app developer who makes dating apps.

Guneet aka Shewta Tiwari will mark her entry in Amber’s life and thus bring new tadka and twist.

Guneet and Amber’s friemdship and story will begin with a clash and it will be followed by new twist.

Amber and Guneet’s this friendship is going to give new hopes to Nia as she sees companion and love partners in them.

Will Nia’s efforts be able to unite Guneet and Amber, stay tuned for more exciting updates of the upcoming episodes only on serialgossip.com