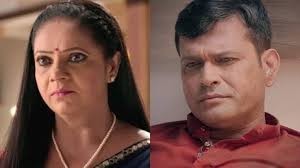 Mishti has discovered Mehul and Parul's truth of being husband and wife and also had a son Kunal.

Mishti is shocked to hell as she discovers another truth that Mehul had never married Meenakshi.

Mishti discovers the truth that Meenakshi had never married Mehul and they have different mystery behind it.

Mishti is shocked as Mehul unveils this shocking reality to Mishti and laughs as how he trapped Meenakshi.

Mehul tells that now he will trap Abeer in his game and Mishti warns him that he will not be able to do that as she is standing as shield for Abeer.