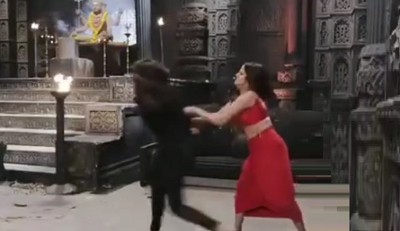 Colors popular TV show Naagin 4 is up for the deadliest face off between Vish and Brinda.

Earlier in the previous episode, actress Anita Hassanandani made her glamorous naagin entry to spice up the love and the revenge saga.

Vish (Anita Hassanandani) kidnapped Nayantara and swears to help her in taking revenge on Brinda.

However things don't come in Nayantara's favor after how Vish has brainwashed her against Brinda.

Nayantara turns to save her mother Manyata but Vish catches hold of her.

Vish will turn to kill Nayantara where she will even throttle her neck.

On one side, Brinda gets into Parikh house to take the revenge of her mother,

Let see what will happen next in the show and if Brinda will be able to protect Nayantara from Vish.

Naagin 4: Naagin Brinda's first war killed Madhav to dead beginning revenge The top TV supernatural show Naagin 4 is all set to begin the revenge saga of Brinda against the ...

Naagin 4: Vish brainwashes Nayantara badly uses her to kill Brinda The top TV supernatural show Naagin 4 is up for the thriller revenge saga to begin in the storyline. So far ...

Brinda (Nia Sharma) and Dev’s (Vijyendra Kumeria) love in the rain poisonous game begins in Naagin 4 Colors popular TV serial Naagin 4 is up for a high voltage twist in ...

Manyata's old enmity with Parikhs and Dev-Brinda's marriage to sacrifice Nayantara's life in Naagin 4 Colors top TV show Naagin 4 is going to witness ahead high time in the story. Dev ...