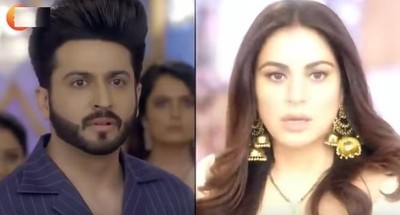 It was earlier seen that Mahira marks her shocking entry with cut wrist in Karan Preeta's Mukh Dikhayi.

Shockingly Mahira states herself as Mahira Karan Luthra filles the sindoor that is her own blood.

Karan Preeta and everyone are shocked to see this madness of Mahira.

Later Mahira collapse when she is rushed to hospital.

Ramona gets the police and blames Karan for every wrong done by Mahira.

Karan and Preeta in tension with Ramona's accusation

Further Ramona does not stop and also blames his entire Luthra family.

Police thus takes a decision to arrest entire Luthra family and throw them behind bars.

Kundali Bhagya: Preeta’s best revenge on Mahira past returning back to Karan