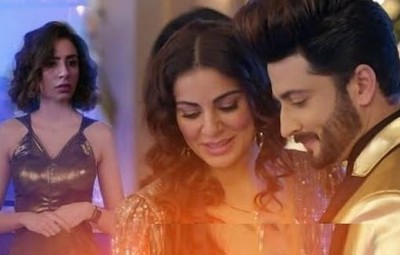 It was earlier seen that Preeta and Shrishti gathers proof against Akshay to expose him before Kritika and entire family members.

While Akshay comes to know about this master plan of Preeta.

In the party held in Luthra house Akshay constantly stares at Megha at the party and he even tries to feel her during a dance.

However, she resists him and walks away from the dance floor.

Later, Akshay follows her and misbehaves with her again.

This slap from Preeta is worth watch.

Now, in the coming episode, at the party, Preeta claims that Akshay is not the right person for Kritika.

Megha initially reveals that Akshay misbehaved with her.

Karan loses his temper on Akshay and drags him by his collar.

However, soon, Megha changes her statement and confesses that she was hired by Preeta.

Akshay lies before everyone that Preeta is doing so to get him married to Srishti.

Meghna recalls how Akshay had proposed a deal to malign Preeta and Srishti.

OMG is Preeta doing all this just to get Akshay married to Shrishti?

No chance, why will Preeta do this when Shrishti and Sameer love each other.

Will Karan show faith in Preeta?

It would be interesting to see how Preeta and Shrishti now expose Akshay and his evilness.