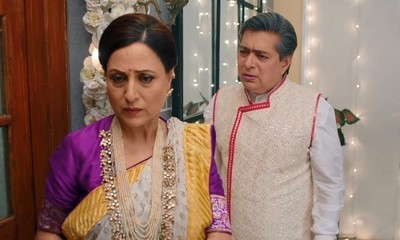 The upcoming twist of Ghum Hai Kisi Ke Pyaar Mein will see the huge revelation of Bhavani and Devyani's relationship.

Pulkit finally reveals everything to Sayi.

Sayi is shocked and agitated realizing how heartless Bhavani has been towards her own daughter Devyani.

Sayi promises to unite Pulkit and Devyani at any cost.

While here Bhavani locks Devyani in her room and senses some bad intuition,

Pulkit and Devyani married on Mahashivratri and this is the reason why Bhavani is restless on every mahashivratri.

Bhavani's evil side to get expose

Bhavani not only separated Pulkit and Devyani but Bhavani also separated Devyani from her daughter Harini.

The reality is that Devyani herself is not the real daughter of Bhavani.

Bhavani is the second mother of Devyani and the truth is not known to anyone.

So, how Sayi will expose the heartless and the evil side of Bhavani before Virat and everyone,

Do read the new updates at SERIALGOSSIP.COM