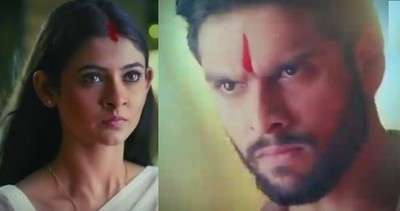 It was earlier seen that Raghav and Pallavi were coming close and developed special love feelings.

Now there will be a huge turnover in Raghav and Pallavi's life.

As per the latest promo Raghav is all set to marry Pallavi.

Raghav buys Pallavi and her shop using his money power.

Raghav further sends Red saree and jewelry for Pallavi and calls her to marry him.

This time Pallavi vows to destroy Raghav using his money only.

Pallavi compels Raghav to fill her hairline with sindoor

Pallavi marks her grand entry in white saree where she makes Raghav fill her hairline with sindoor.

Mehndi Hai Rachne Wali: Raghav Pallavi confess I Hate You instead of Love

Mehndi Hai Rachne Wali: Love is in the air of Raghav Pallavi

Mehndi Hai Rachne Wali: Love is in the air of Raghav and Pal...