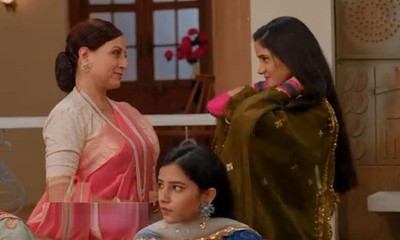 Earlier it is seen that how Virat gifts a ruby pendant necklace to Sayi while he doesn’t bring anything for other family members.

As soon as Karishma questions Sayi about the pendant, she reveals Virat’s gift which leaves everyone shocked.

Bhavani isn’t ready to let Sayi wear that expensive pendant because it is Virat’s money that belongs to the Chavan family as per her belief.

Sayi takes out the necklace and gives the same to Bhavani as she likes it.

Virat to get a new pendant for Sayi

Bhavani smirks while Sayi sacrifices Virat’s gifted pendant to her.

Virat gets upset as his face falls seeing how she gave his gift to someone else but he isn’t ready to get Sayi sad.

Thus, Virat brings a new pendant for her, but this time will Sayi accept it or there will be any new twist.