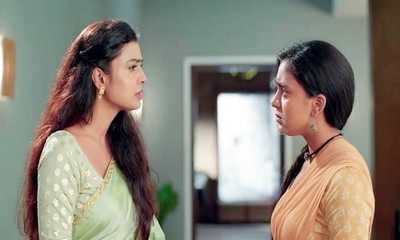 Star plus TV serial Imlie is gearing up for a drastic showdown between Malini and Imlie.

As per the current story, Malini rushes to Tripathi House to meet Aditya who is sick.

Unfortunately, Imlie is already there with Aditya and this badly breaks Malini’s heart.

Malini gets so pissed off that when Imlie comes to talk to her, she bursts out at Imlie like never before.

Imlie and Malini’s argument gets heated when Malini compels Imlie to be clear on what she wants and if she really wants her (Malini) to be with Aditya then why she isn’t leaving her.

Malini curses Imlie badly and asks her to stop with her lies and emotional drama.

While Aditya interrupts in, Malini compels him to make things clear instead of complicating her life.

Where Malini asks Imlie and Aditya to confess their marriage relationship to the family, and let her get rid of all mess.

Imlie and Aditya take a decision

Aditya, later on, agrees with Malini and compels Imlie to accept their relationship publicly.

So, what will Aditya and Imlie do next, and will the Tripathi's accept their relationship?

Imlie: Kunal grooves soft side for Malini, duo gets closer a...

Imlie: Imlie stands strong against Anu and right of Meethi, ...

Imlie: Time for Imlie-Aditya fight for rights with clear ultimatum to Anu

Imlie: Time for Imlie-Aditya fight for rights with clear ult...