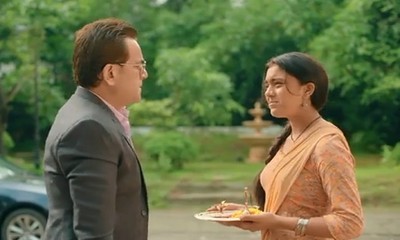 Imlie: Disgusting deal of Dev to Imlie gets big twist

Star Plus TV show Imlie is gearing up for a major showdown between Dev and Imlie.

It is seen that how the Trpathis are adamant to never accept Imlie as their daughter-in-law.

Dev at the same time wants Imlie to leave Aditya and Tripathis because he can’t see Malini’s life ruined.

Further Dev confronts Imlie but what deal he makes to Imlie is what hits Imlie harder like never before.

Dev goes such selfish that he asks Imlie to leave Aditya and his family and come with him to the Chatruvedi house.

Imlie gets angry as bear when Dev makes a disgusting promise to her that he will not only give his name to her but will also get her married in a big family than Tripathis.

Dev’s such selfish demand as a father develops more hate in Imlie’s heart for him.

Imlie isn’t ready to leave Aditya or drop her fight for love.

Imlie thus warns Dev and also compels that she is ready to face all the hardships to win Tripathis heart but will never leave them.

Dev gets disappointed while Imlie is now adamant to never leave Aditya.

So the big twist is what we don’t want you to miss.

Imlie: What! Tripathis stoop low to force Aditya In your fa...

Imlie: Poor Imlie thrown out of house in Aditya absence

Imlie: Poor Imlie thrown out of house in Aditya absence The...

Imlie: Malini full of oneself snatches Aditya from Imlie

Imlie: Malini full of oneself snatches Aditya from Imlie St...

Imlie: Malini gets Aditya Imlie on the rocks The upcoming e...