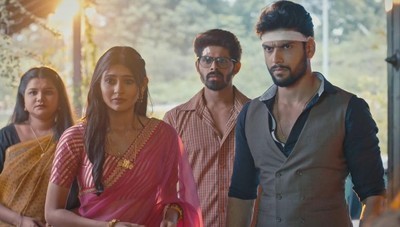 Star Plus show Mehndi Hai Rachne Wali has always kept its audience gripped to their seat with its engaging yet progessive storyline.

In the upcoming episode viewers will get to witness high voltage drama in Raghav and Pallavi’s life.

It was earlier seen that Pallavi decides to help Mandar as he has lost his memory.

Pallavi takes him house where she introduces him to the family, but he refuses to recognize anyone.

Meanwhile, he tells everyone that he just remembers one name and that is Pallavi.

Mandar claims his rights over Pallavi

Raghav warns Mandar to stay away from his wife.

Do not miss the next big twist, so stay tuned for more updates on SerialGossip.com