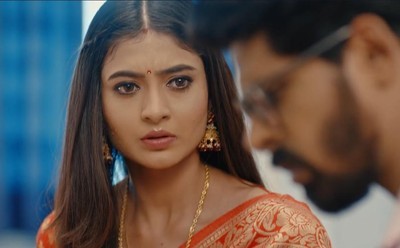 Star Plus popular show Mehndi Hai Rachne Wali has never failed to impress its audience with the twists in the life of Raghav and Pallavi.

It was earlier seen that Mandar challenges Raghav that he will snatch away his watch within 7 days.

Raghav is worried about losing Pallavi and is making every attempt to keep her away from Mandar.

In the upcoming episode, Mandar gifts gold bangles to Pallavi while she refuses to take it.

Mandar request Pallavi to wear those bangles as a gift from him.

Mandar confronts Raghav with a plan

Raghav is angered to find Pallavi with Mandar and he questions her about it.

On the other hand, Mandar challenges Raghav saying that he will take her back as his wife soon.

What will Raghav do now? What is Mandar’s intentions behind Raghav and Pallavi?