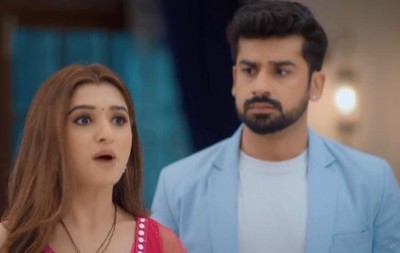 Exclusive update by Serialgossip.com on an upcoming episode of Star Plus popular serial Anupama which will showcase an interesting twist and turn.

However Kinjal does not want to stay away from family as she never got that family satisfaction in her life.

While Paritosh fails to understand Kinjal's plight and decides to make his own world.

Paritosh gets a new girl in his life and starts an extramarital affair with her.

Paritosh is much happy in his own world and starts cheating Kinjal.

Kinjal comes to know about the same which brings major turmoil in her life.

Anupama: Pakhi realise Anupama's real worth patch up time next

Pakhi realize Anupama's real worth patch up time next in Sta...

Mysterious entry in Anupama TV serial to get mesmerised seei...

Anupama: Anupama's aces up her sleeve to push back Kavya

Anupama's aces up her sleeve against Kavya in Anupama One o...

Anupama: Kavya refuses to get Pakhi ready for performance

Anupama: Kavya refuses to get Pakhi ready for performance E...

Anupama: Anupama's ace in the hole to hit Kavya harder

Anupama's ace in the hole to hit Kavya harder in Anupama Th...

Bapuji take blunt action against Anupama, Pakhi, and Kavya i...