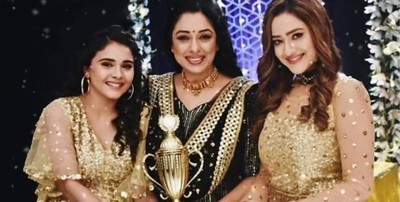 Star Plus popular show Anupama starring Sudhanshu Pandey and Rupali Ganguly is about to showcase some interesting twist and turn in the upcoming episode.

As we know, Pakhi gets instigated by Kavya against Anupama which is drifting Pakhi away from her family.

In the coming episode, Pakhi will learn her mistake and will feel guilty for insulting Anupama.

On the other hand, Kavya goes missing just before the performance of Pakhi which makes everyone worried about her performance.

Meanwhile, Anupama decides to help Pakhi and sends Samar to her rescue.

Samar will be seen performing with Pakhi leaving everyone stunned.

Pakhi dedicates her trophy to Anupama

Luckily, Pakhi will win the competition with the help of Anupama and Samar.

Pakhi will apologize to Anupama for treating her like a stranger and insulting her all the time.

Anupama and Pakhi will hug each other while Kavya will be irate seeing mother and daughter bonding.

Anupama: Anupama gets triggered by Pakhi, freezes up on stag...

Anupama: Kavya gets rid of dance performance to attend an interview call

Anupama: Kavya gets rid of dance performance to attend inter...

Anupama: Self-centric Kavya ditches Pakhi on stage In your ...