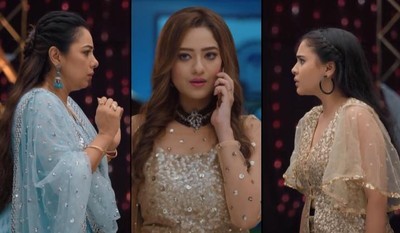 Exclusive update by Serialgossip.com on an upcoming episode of Star Plus popular serial Anupama which will showcase an interesting twist and turn.

It was earlier seen that Pakhi had earlier learnt a huge lesson in Vanraj's birthday party when Kavya misbehaved with her and showed her real place.

Kavya has once again tried to manipulate Pakhi who turns her mere pawn against Anupama.

Kavya tried her best to insult Anupama using her own kids and now it is Pakhi's turn.

However Pakhi gets to taste the bitterness of Kavya's medicine when she leaves her last minute alone during the dance performance.

Pakhi gets timely support from Anupama

Anupama steps in this time where she supports Pakhi and makes her win the competition.

In this way Pakhi loses mere pawn Pakhi back to Anupama.

Anupama: Anupama gets triggered by Pakhi, freezes up on stag...