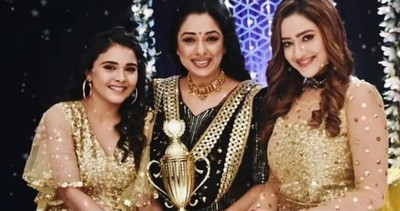 Star Plus most popular show Anupama is about to showcase some interesting twists and turns in the upcoming episode of the show.

It was earlier seen that Kavya keeps instigating Pakhi against Anupama and creates problems amid them.

Meanwhile, Kavya ditches Pakhi for her interview call just before their performance.

Pakhi breaks down thinking about insulting Anupama and giving importance to Kavya.

Pakhi gets emotional while Anupama comes there to help Pakhi.

Further, emotionally Pakhi expresses her feelings to Anupama and she tells that Kavya left her before their performance.

In the upcoming episode, Pakhi requests Anupama to perform with her.

Anupama agrees to perform with her leaving the Shah family in shock.

Pakhi and Anupama to rock the stage

Pakhi and Anupama stun everyone on stage with their performance and also win the trophy.

On the other hand, Pakhi will be irate looking at Anupama and Pakhi getting close once again.

WOW! Are you excited about the mother-daughter reunion?

It will be interesting to see what happens next in the show.