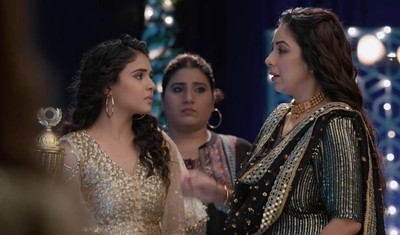 Star Plus's popular show Anupama is about to showcase some interesting twists and turns in the show's upcoming episode.

It was earlier seen that Kavya ditches Pakhi just before the performance to attend her interview call.

Meanwhile, Pakhi cries and feels that it happened because she insulted Anupama while Anupama comes to her rescue.

Anupama decides to perform with Pakhi on the song that they had performed when she was in standard 5.

Besides, Shah family is shocked to see Anupama performing with Pakhi and they cheer for them.

On the other hand, Kavya returns and finds Pakhi dancing with Anupama and gets cheesed off.

Anupama gets Kavya on stage to receive the trophy

In the upcoming episode, Anupama and Pakhi win the competition and they receive the trophy.

Meanwhile, Anupama decides to bring Kavya on stage too as she was also Pakhi's guru.

Are you excited to watch Pakhi and Anupama perform together?