Anupama: Kinjal turns out to be Anupama 2.0 for Shah family (Upcoming Twist) 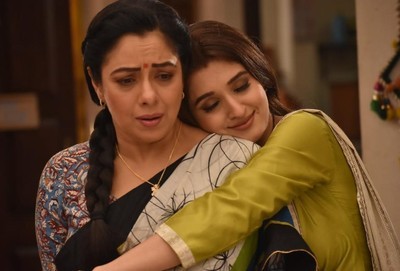 Star Plus's popular show Anupama is about to showcase some interesting twists and turns in the upcoming episodes of the show.

As we know, Paritosh is instigated by Rakhi and wants to leave Shah's house and settle with Kinjal in their new penthouse.

Meanwhile, Paritosh also gets into a major argument with his family members.

Paritosh also blames his family for turning Kinjal like them.

Soon, Kinjal will not only enforce Paritosh to stop insulting his family and underestimating his mother but also help him learn his lesson.

Kinjal will also help Anupama to get the love and respect she deserves.

Kinjal and Paritosh get ready to leave the Shah house

In the upcoming episode, Kinjal and Paritosh make their final decision to leave the Shah house.

On the other hand, Kinjal is upset to leave her family but is compelled to leave because of Paritosh.

Further, Kinjal will be seen turning out to be like Anupama as her gesture towards her speaks volume.

Anupama: Baa declared to be root cause of Shah Family problems

Anupama: Baa (Alpana Buch) declared to be the root cause of ...

Anupama: Time to bring huge revolution in Shah Family The u...