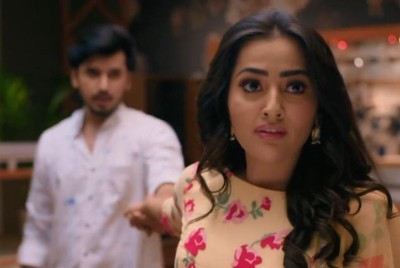 The upcoming track of Star Plus popular serial Anupama is shaping up for good twist to jiggle Samar and Nandini's life.

It was earlier seen that Rohan returned to Nandini's life and created huge chaos for her and Samar.

Rohan created a misunderstanding between Samar and Nandini to separate them.

However Samar learnt many things from Anupama who decides to apologize before Nandini.

Samar Nandini patch up in a romantic way

Samar and Nandini patch up in a romantic way where they decide to tackle Rohan jointly.

There is a huge twist in tale ahead as Rohan belongs to Karodia family.

Rohan is not going to leave Nandini so easily and let her live a happy life with Samar.

It would be interesting to see what Rohan plans against Nandini ahead.

Anupama: Vanraj learns about Anuj's love for Anupama past 26 years

Anupama: Vanraj learns about Anuj's love for Anupama past 26...

Anupama: Anupama reminds me of Sridevi from English Vinglish...