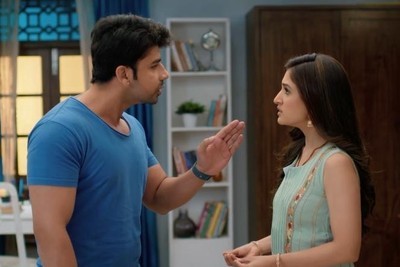 It was earlier seen that Kinjal and Paritosh are not so on good terms when the duo happen to fight once again.

Earlier he used to compare Kinjal with Anupama and now he compares her with Kavya.

Anytime as per his own benefit and shockingly in the meantime when they get in fierce argument Paritosh mistakenly give a mjor blow to Kinjal where she falls on the bed with shock.

This happened mistakenly where Toshu apologize for his mistake and Kinjal understands him.

Paritosh shows concern for Kinjal but later its the same issue with both of them staying apart.

Is this the hint of the major accident taking place in Kinjal's life?

Till then keep tuned to serialgossip.com the entertainment news website for more exciting updates in Star Plus Anupama.

Anupama: Kavya breaks down in front of Rakhi, Vanraj depressed

Anupama: Kavya breaks down in front of Rakhi, Vanraj depress...

Anupama: Vanraj gives up, Kavya takes the charge for revenge

Anupama: Malvika apologizes to Anupama for the past mess

Anupama: Malvika apologizes to Anupama for the past mess St...

Anupama: Anuj turns insecure worries about drama at the wedding