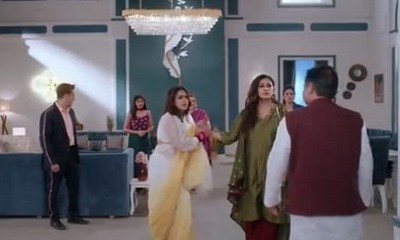 So, Meera cracks a illegal business deal with the Minister when Pakhi slaps the Minister and ousts him from the Raichand Mansion.

Therefore, when Meera begs the Minister to accept the deal, the evil Minister puts forth a shocking condition.

Thus, when Meera sells Pakhi to the Minister, this literally shocks everyone to the core.

Furthermore, Meera rejoices her victory thinking she got a big deal and also got rid of Pakhi.

But poor she doesn't know that Agastya recalled his lost memory and so now he is coming back to get his Pakhi.

Now, it would be super exciting to watch how Agastya will save his Pakhi anf teach a good lesson to the evil Minister and Meera.

Agastya (Zain Imam) and Pakhi (Reem Shaikh) rush out from Me...