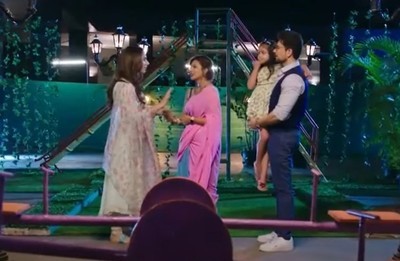 As revealed, Priya has shifted to Krish's house in Mumbai after being homeless.

Though she resists the idea, for Pihu, she had to accept the offer.

Here, Pihu likes Krish a lot and they get along very well.

While Priya has changed alot for Pihu, Krish is her secret admirer as ever.

Krish loves Priya but he is aware that she has feelings only for Ram.

Krish dance with Pihu and Priya

While Priya and Pihu are dancing, Krish also joins them and they have a gala time.

Although Krish loves Priya, he is keeping his distance from her knowing her love for Ram.

However, at the same time, Krish wishes Priya moved on in life and lead a happy life with him.

Will this ever happen that Priya will move on with Krish?

Bade Achhe Lagte Hai2: Ram get hold of Varun as he tries to ...