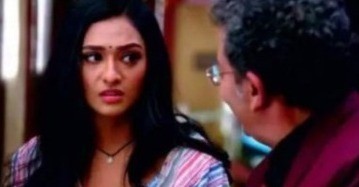 Zee TV's most liked show Bhagyalaxmi is gearing up for shocking news and drama.

As seen, Laxmi's pregnancy report has brought huge twist in the show.

However, in reality Laxmi isn't pregnant but she has joined hands with the family doctor to create fake report.

It is seen that pundit has warned Laxmi that Rishi's life is at risk for many months to come.

Hearing this, she is worried because she has only two months to stay with Rishi and she does not want to leave him alone.

Thus, she convinces the doctor to make false report to save Rishi.

However, while Laxmi is revealing about this to Pundit, Virendra overhears.

Further ahead, Virendra apologizes to Laxmi with folded hands and cries his heart out.

Now the real fun begins as Laxmi along with Virendra will continue the drama and expose Malishka's fake pundit.

Keep tuned to serialgossip.com to get more updates on the show.

Bhagyalaxmi: Laxmi's big move to save Ahana as well as Rishi...

Bhagyalaxmi: Rishi carries Laxmi in arms Malishka burns in a...

Bhagyalaxmi: Woah! Rishi and Laxmi get blessings from pundit

Bhagyalaxmi: OMG! Will Rishi forgive Malishka for this henious crime?

Bhagyalaxmi: Rishi dumbfounded seeing Laxmi in a pool of blo...