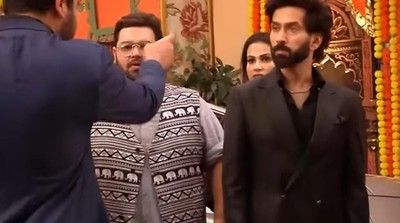 Sony TV's popular and most liked show Bade Achhe Lagte Hai2 is up with interesting twists and drama.

As revealed, Kanika is a flirt, and this time she has targeted Ram to meet her lusty desires.

However, Ram's savior Hanuman that is Pihu saves him from her clutches.

Unfortunately, Kanika gets revengeful for Ram's denial and accuses him of misbehaving with her.

While Minister is aware of his wife's misdeeds, he shields her and instead defames Ram.

There is huge drama as Ram goes wild at Minister and his wife for trapping him in the dirty plan.

Further, all this affects the deal as well and Minister cancels it tagging Ram as characterless.

However, Ram is not going to take this nonsense and decides to prove his clean image.

Now how will Ram do this? Will Vedhika's plan work and will Ram agree to marry her?

BALH2: Hot Drama! Kanika gets closer to Ram for a lusty kiss

Bade Achhe Lagte Hai2(BALH2): Pihu gets into Action to shiel...

BALH2: Tit For Tat! And finally Nandini's reign comes to an end

BALH2: Pihu calls out Papa to Ram in his and Vedhika's marri...