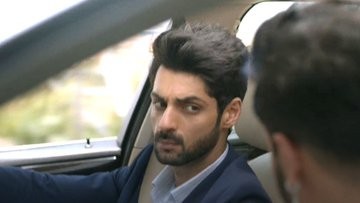 As Aditya and Amber sit in the Tractor, the Host tells Aditya that only the People from Amristar can participate in it.

Aditya asks him to ask Amber to which Dadaji tells him that he has this covered and Aditya is from Family.

A Lady who seems to be the Relative cheers Aditya and tells Surpreet that she is cheering for the Man she wants to.

Aditya remember the Humiliation he and his Mother has gone through and drives it faster. Amber gives him the tough competition but Aditya manages to Win.

Aditya taunts Amber for losing while Amber mocks him for trying to make him feel bad as Aditya himself lost the Chef Competition.

Dadaji enjoys the moment and dances with the Family while Surpreet is shocked and is mocked.

Surpreet asks Aditya to take Blessings from her as she is his Mother to which he Burns the Poster and tells she is not his Mother.

Ginni on the other side Happily enjoys her Late Father's Birth Anniversary and Gulraj worries for Ginni to which Buaji tells her that there is someone made for her.

Aditya on the other side is adamant not to let go of his Mother's Memories and remember about their Dream Hotel.

He tells the Broker to take him to the Place which he wanted to which Broker tells him they may not agree. The Car stops in front of Ginny's Daaba.

Ginni tells Gulraj not to worry and says that they can be relieved until they have Daaba. Aditya is determined to get the Daaba.

Ginni is worried about the Catering order. While Aditya gives her Ten Lakhs Cheque to which she tells him that she won't take such huge orders. Aditya shocks her by telling her that the Amount is for her Daaba as he wants it.

Stay Tuned to Serialgossip.com for the Latest Updates of your Favourite Shows.