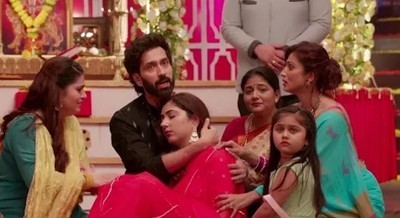 As seen, Priya becomes unconscious and Pihu cries for her badly.

Everyone tries to convince her that Priya will be fins but she is inconsolable.

As Priya doesn't respond, Ram is unable to suppress his emotions for her and hugs her tight.

Further, though Pihu blames him for Priya's bad state, he feels concerned for Pihu as well.

Ram worries for Priya and Pihu

Moreover, they call the doctor to check Priya and shift her to Ram's bedroom.

Pihu sits next to Priya trying to wake her up but fails to leave her worried and angry with Ram.

Ram is worried about Priya's health and also her condition when Pihu will bombard her with questions.

Further, Ram feels sorry for complicating Priya and Pihu's life because of his needs.

Stay tuned to serialgossip.com to see what will happen further on the show.