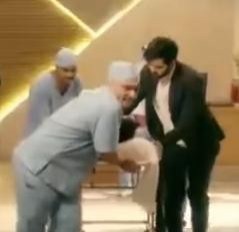 It seems Rishabh calls Preeta to inform her about his location when a truck speeds towards Rishabh and dash him.

Rishabh is thrown away and lies in the pool of blood.

Poor Rishabh falls lifeless when Karan reaches there on time.

Karan turns much restless to save Rishabh

Karan rushes to see the person where he is shocked to see his brother Rishabh.

Karan carries Rishabh to hospital and asks them to treat his brother soon.

Karan is restless where he is worried for his brother.

Will Karan unfold his real identity to save brother Rishabh?

Kundali Bhagya: Arjun takes Preeta to meet Karan points a knife at her