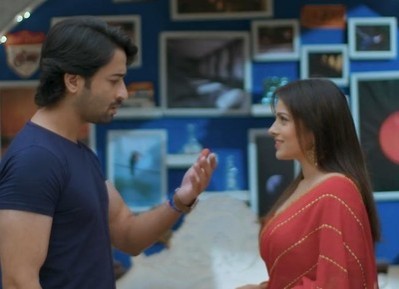 It was earlier seen that Kanha is not ready to get close to Anjali as he is married to Sayuri and loves her.

However Anjali is not going to leave Kanha so easily where she gets ready as Kanha's wife and plays the game.

Where Anjali tricks Kanha that he filled her hairline when he was fast asleep and got married to her.

Anjali plays her game well when she reaches Kanha's room and hugs him tight.

Kanha is much irritated with Anjali

Kanha is much irritated with Anjali and he hates her.

While this time Anjali is not going to leave Kanha where she portrays the role of his wife.

Anjali is much happy where she see victory in her role this time.

It would be highly interesting to see what happens next on the show as Sayuri senses Kanha in danger.

Woh To Hai Albela: Kanha go down on knees for Sayuri unaware of big storm

Woh To Hai Albela: Kanha go down on knees for Sayuri unaware...