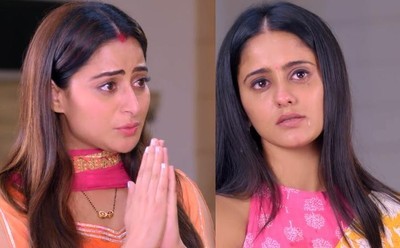 It seems Pakhi and Sayi finally learn the truth and come face to face.

Sayi is much heartbroken as Pakhi has finally got entry in Virat's life as Mrs Virat Chavhan.

Sayi is much upset and angry that Virat has moved on in life and forgotten her.

Poor Sayi feels Virat also loves Pakhi a lot and hence they have a son Vinayak too.

However, Pakhi has something in her mind when she reaches Sayi's house.

Pakhi begs for an apology and she folds her hand before Sayi seeking forgiveness.

Where Sayi is bugged with intolerable levels of hardship where she refuses to forgive Pakhi at any cost.