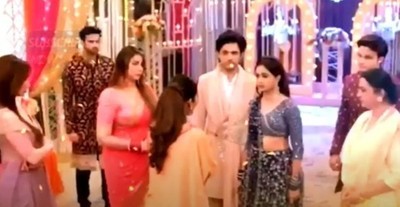 Zee TV's interesting and most action-packes show Kumkum Bhagya has managed to keep the audience glued with unexpected twists and turns.

As per the ongoing track, it was expected that Prachi will expose Rhea this time with solid proof.

However, Rhea's smartplan has ruined Prachi's expectations and left her shocked to the core.

Shockingly, Rhea is proved pregnant with Ranbir's child as per the DNA Report.

Celebrating her victory, Rhea creates another drama to make Prachi apologize to her.

Prachi denies it and leaves without apologizing leaving Pallavi shocked.

Further, Rhea instigates Pallavi against Prachi and creates drama to be leaving.

They plan to let Rhea celebrate her victory by giving up and then trapping her.

Thus, Prachi agrees to apologize to Rhea and make her happy.

Stay tuned to serialgossip.com to know what will happen further.

Kumkum Bhagya: Pallavi's ultimatum to Prachi on her sangeet