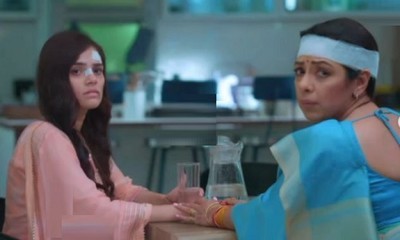 In the latest story of Anupama TV serial, now you will see Samar entering the frame for Dimple.

Anuj and Anupama decide to fight for Dimple’s justice but Nirmit backs out.

Nirmit leaves Dimple but the latter still stands courageously to fight for her dignity.

Therefore, the huge twist comes when the Shahs force Anuj and Anupama to withdraw the case.

Thus, Samar gets so angry that now he decides to support Anuj and Anupama in their fight for Dimple.

And here when Vanraj and Baa oppose his decision,

He shockingly challenges them determining to stand for Dimple as humanity.

Dimple to get more courage

Though Dimple needs no man to fight for herself, now, Samar will play a pivotal role for her.

Let’s see how Dimple’s entry into the story will bring struggles for the Shahs.

Anupama: Scary Twist! Anupama goes missing in Jungle The up...

Anupamaa: Anupamaa gets threatening notes Star Plus show An...

Anupama: Cut-throat! Anupama gives it back at Dimple's rapists

Anupama: Cut-throat! Anupama gives it back at Dimple's rapis...

Anupama: Anupama ruthlessly gets dragged away but doesn't BREAK

Anupama: Anupama ruthlessly gets dragged away but doesn't BR...