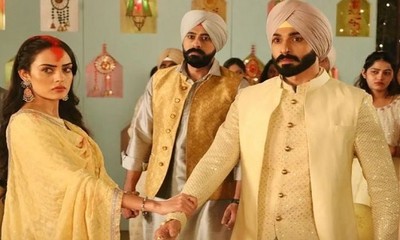 In the next upcoming episode of Star Plus Hindi TV serial Teri Meri Doriyaan, now you will see Angad and Seerat’s wedding alliance getting fixed.

Earlier it was seen how Seerat tricks Angad and the Brars by impressing them.

Angad finds his perfect soulmate in Seerat while the Brar family also gets convinced with his choice.

However, the twist in the tale unfolds next in when Angad calls Seerat but Sahiba picks up the call.

Sahiba to take a major step

Sahiba hates Angad for she believes that Seerat deserves someone better than him.

So, now when Angad recognizes Sahiba’s voice while he actually called Seerat, the story spices up herein.

Let’s see how Sahiba reveals the truth to stop Angad and Seerat’s wedding.

Or will it be Angad who finds the truth himself about Sahiba and Seerat's real family?

Teri Meri Doriyaan: Not Seerat but Sahiba to be Angad's wife

Teri Meri Doriyaan: Not Seerat but Sahiba to be Angad's wife...

Teri Meri Doriyaan: Seerat's this act of innocence to lure A...