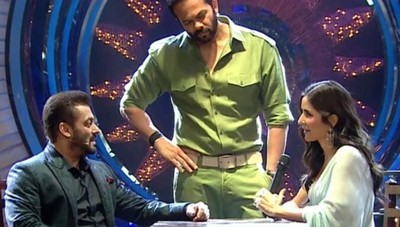 The Weekend Ka Vaar episode has arrived and Salman Khan will be seen shooling the contestants on how they performed in the week.

Every weekend we get to see celebrities in the show and they interact with Salman Khan and the contestants in the house.

Rohit Shetty and Katrina would be gracing the show with a triple Dhamaka Weekend Ka Vaar week.

During their meeting, Katrina would make some allegations against Salman.

Katrina and will be sitting across a table, with Rohit playing the judge.

Salman and Katrina's moments of fun and laughter

Soon, she punishes him by asking him to praise him.

Bigg Boss 15: Raqesh Bapat to the enter house as a WILD card

Bigg Boss 15: Raqesh Bapat to enter the house as a WILD card...