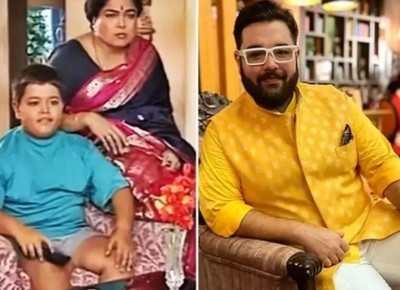 So fans of Bade Achhe Lagte Hai2 very well know this face as Ram's bestie Adi. Adi's role is played by Ajay Nagrath that adds comic relief to the show.

However, here's the News! How many of you remember the chubby mischievous kid from the early 90's show Shrimaan Shrimati? Yes, that cute adorable kid is the same boy who plays Ram's bestie in the popular show BALH2.

Ajay is well known for his light comedy in the show CID as well. He has acted in many movies and shows as well.

Though, big and small screens loved him for his chubbiness, losing weight was a huge problem for him right from childhood.

The turning point of Ajay's life

However, the biggest turning point in his life was the show Biggest Loser Jeetega where he had managed to lose 60kgs. Unfortunately, a near-to tragic accident left him on bed rest which once again added those extra pounds.

Now he is back on his foot and determined to once again start his fitness regime and set the screen on fire.

We wish luck to Ajay Nagrath in his mission and hope to see him more on screen.

For more such interesting news, Keep tuned to serialgossip.com

Bade Achhe Lagte Hai2: Ram moved as Priya bursts out at Raj for hurting him