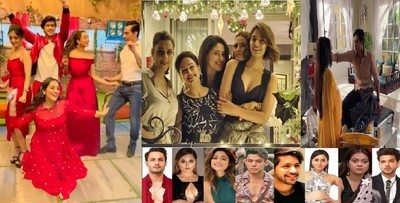 The Hindi TV shows are leaving no stones unturned to entertain the audience with their high-level dramas.

We never fail to give you the latest updates, spoilers, and news about your favorite shows and actors.

Here are some top 5 news of TV:

Madalsa Sharma shared a reel with the Shah family, where Samar, Vanraj, Kinjal and Nandini, and Bapuji are seen dancing on 'Jingle bell rock'.

Madalsa also shared the first poster of her music video with Namit Khanna on her Instagram.

In the upcoming track of the show Anupama, we will get to see a Christmas party at Shah's house with some high-level drama and twists.

Gaurav Khanna and Akanksha Khanna groove to the new song of Badshah:

Akanksha Shah posted a new reel with hubby Gaurav Khanna on the lastest song of rapper Badshah and wrote
'late to trend ….. but what the heck 🤪'

Gaurav Khanna commented on the post saying 'Wat late.. 😂 this happens when u dnt knw that ur wife will impromptu ask u to make a reel out of the blue .. i dnt knw wat m supposed to do also . 🤣😅. I thought we were going fr a walk🤔'

Did you check the reel yet?

Erica Fernandes and Sonya Ayodhya celebrate Xmas with their friends:

Erica Fernandes has been in the news since she left the popular show Kuch Rang Pyar Ke Aise Bhi 3.

During Christmas eve, the actress was in a festive mood along with her co-actors from the show Kasautii Zindagii Kay and Kuch Rang Pyar Ke.

Randeep Rai, who is currently seen as Anand in Balika Vadhu 2 on Colors, has suffered a fracture.

The actor has fractured his left heel but continues to shoot despite the injury.

Sharing the picture, he wrote – ‘fractured my heel and this is how we are shooting #showmustgoon 🧿 Thanks to the entire team of #balikavadhu2 ❤️.

Bigg Boss 15: Devoleena Bhattacharjee to get evicted this week?

The popular reality show Bigg Boss 15 entertained us with some amazing twists and turns along with spice this week.

In the house, we are getting to see breaking bonds and relationships right now.

The show has completed its half journey and the finale is close.

According to the voting polls, Devoleena Bhattacharjee will be evicted this week.

Let's wait and watch if there will be an eviction this Christmas week.

Anupama: Anuj has special surprise for Anupama Star Plus TV...

Anupama: Huge disappointment! Anuj tries to keep away from Anupama

Anupama: Huge disappointment! Anuj tries to keep away from A...

Anupama: Malvika invites Anuj-Anupama for Christmas to make another announcement