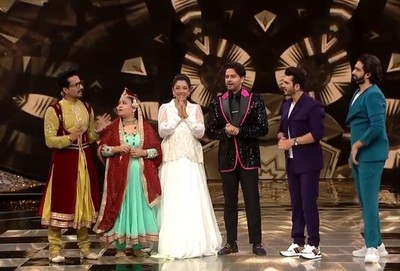 Ravivaar with star Parivaar is up for another star-studded episode for the fans.

In the upcoming episode, we will see Sayi and Virat, Anuj and Anupama, Imlie and Aryan, Kavya and Vanraj, Abhimanyu, and Akshara.

We will also see Shiva and Raavi from Pandya Store and Harshwardhan and Manjari from Yeh Rishta Kya Kehlata Hai.

They gather for the games in two pairs: Pati and Patni.

Arjun invites Harsh and Bharti to the stage to give clues in the first round.

After a tie-breaker round, Team Patni guessed the song right and they win the round.

Imlie from team Patni goes to the Ravivaar with star Parivaar bank and brings rupees 500.

Aryan and Anuj mock Imlie for getting only 500 rupees.

Anupama fights with Anuj for troubling Imlie as she gets teary eyed.

Ravivaar With Star Parivaar: Anupama Vs Imlie's family to complete

Ravivaar With Star Parivaar: Anupama Vs Imlie's family to co...