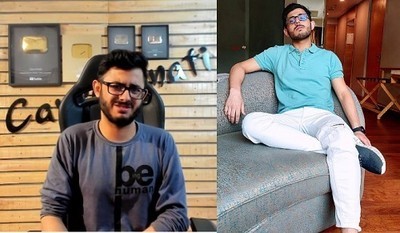 Hailing from Faridabad city in India, Ajey Nagar started making videos from the age of 10 years old where he always dreamt to entertainment people and make videos.

Ajey Nagar dropped the school in 2016 where he even skipped his class-XII board examination to pursue his YouTube career.

Ajey Nagar popularly known as Carry Minati became the internet sensation after his take on YouTube vs TikTok comedy video where he roasted tiktokers especially a tiktoker who insulted YouTubers.

The video broke millions of records by turning most viewed and liked video globally but YouTube removed the video which brought another storm as his fans started demanding justice for Carry Minati.

Carry Minati also posted an emotional message breaking his silence on the video deletion from YouTube.

However he is still getting lots of love from his fans which matters more for him.