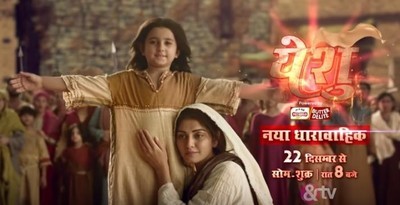 Yeshu serial first time on Indian Television loyal viewers will get to witness show based on Christian community.

There are already few controversies doing round in regard to this serial as mother Mary is shown weeping on Yeshu's insult while in real she was brave heart.

The titular role of Yeshu will be played by Vivaan Shah and Sonali Nikam will be seen as his mother Mary.

The promo of the show is already released where Yeshu is seen having magical powers.

Firstly Yeshu turns a dead fish alive where people witness the same and tags him devil asking him to oust from the village.

Later Yeshu gives vision to a blind old man where once again he gets tagged as black magician devil.

Mother Mary takes Yeshu inside the House and gets weeping.

Yeshu makes Mother Mary understand that he will only do good for people.

Let's see how the story shapes up further.