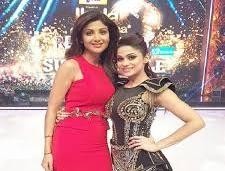 Shilpa and Mashi have some fun time in finale.

Shilpa Shetty and Shamita Shetty entertained audience performing for the on the song Sarara Sarara.

Shilpa praised that Shamita earned everything by hardworking.

Shamita Shetty has impressed judges and audience by their awesome performance during the competition.

Judges not happy by Sanaya Irani and Drashi Dhami’s Te...

Mohit Malik who played Samrat in Doli Armanon Ki has got off...