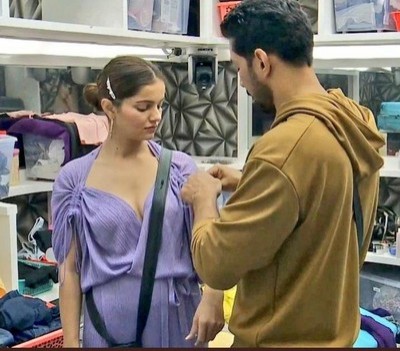 There are three ‘Toofani Seniors’, Sidharth Shukla, Hina Khan and Gauahar Khan, who have the power to change the game of the contestants.

As seen earlier Siddharth Shukla is the king of bed room, Gauhar Khan in Queen of Kitchen and Hina Khan is Queen of BB Mall.

Hina Khan gives seven pairs of clothes to the contestants.

Now Rubina Dilaik is unhappy with Hina Khan’s attitude towards the counting of clothes and hence gets into heated argument with her.

Looks like post this fight Hina Khan refuses to give proper pair of clothes and shoes to Rubina Dilaik.

However Rubina Dilaik did not give up where she made a cool outfit with some cloth.

Rubina really present the dress well with her creativity and she looks hot in the outfit too, much better than anyone else in the house.

Keep going and Rubina Dialik is one of the strong contender this season.