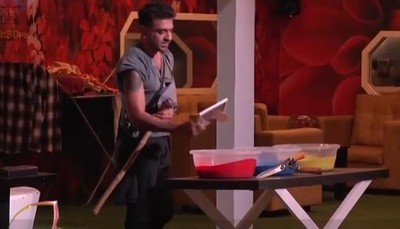 It seems Pavitra Punia gets a challenge from Bigg Boss.

Bigg Boss asks Pavitra Punia to convince Eijaz to sacrifice his two important dear to his heart photo frames to save her this time from eviction.

Pavitra reveals the same to Eijaz where she does not want him to sacrifice.

But Eijaz with heavy heat walks to his bed and gets the photo frame to sacrifice the same.

Eijaz bids goodbye to the photo frame where Pavitra in tears in her eyes yells at him to stop his sacrifice.

Will Eijaz stop or will he prove his true love for Pavitra Punia?

It would be fascinating to see what happens next on the show.