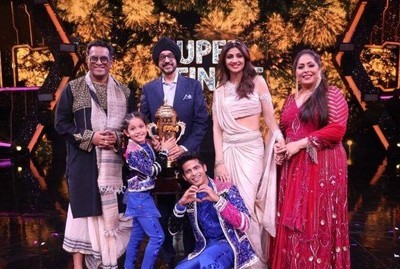 Sony TV most popular Reality Show Super Dancer Chapter 4 has been one of the popular shows where the loyal audiences used to love watching the dance of kids as well as their Super Guru.

Every new episode they had to show a new style of dance form which used to leave the audience impressed.

The show has finally come to an end where  Super Dancer Chapter 4 title has been won by Florina Gogoi (Jorhat, Assam) and Super Guru Tushar Shetty.

The grand finale was graced by rapper Badshah, ace choreographer Terence Lewis, and one of the most popular anchors and dancer Raghav Juyal.

Raghav Juyal also had a dance battle with Sanchit Chanana where he bowed before him and declared him as the winner for him.

Judges were much impressed with Sanchit's unique dance form where they threw their shoes as respect for him.

However, nevertheless, Florina Gogoi aka Fltous won the show with the highest number of votes and she is one of the cutest contestants.

Congratulations Baby you deserve to be the winner Florina as every special guest who appeared on the show wanted to take her home.