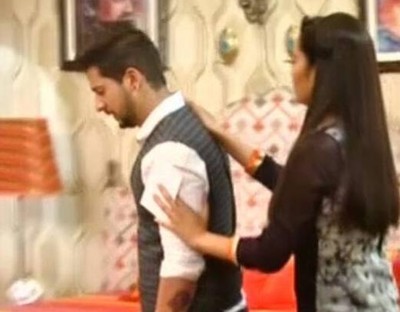 Vivaan's misunderstanding to snatch happiness from Imli, Suraj and Chakor's life in Udaan

As per the track, Vivaan misunderstands as his Imli is carrying Suraj’s baby and he feels betrayal.

Vivaan thinks that if he is not capable to become a father so how can Imli become pregnant and accuse her for having extra marital affairs with Suraj.

Vivaan’s this decision bring havoc in Suraj and Chakor’s happy married life but they do not get any way to clear Vivaan’s misunderstandings.

Ragini adds fuel in Vivaan’s anger provoking him against Imli, Suraj, Chakor and he vows to become powerful and rich to snatch happiness from Imli and Suraj’s life.

Chakor (Meera Deosthale) and Vivaan (Paras Arora) join forces against Imli (Vidhi Pandya) and Suraj's (Vijayendra Kumeria) illegitimate relationship in Udaan Udaan have made quite a progress in the relationship factor ...

Imli's (Vidhi Pandya) heart broken by Vivaan's (Paras Arora) sudden anger in Godh Bharai ritual in Udaan Serialgossip is here again to update you from all the sensational drama in the ...

Ragini exchange DNA reports to mislead Vivaan (Paras Arora) and Chakor (Meera Deosthale) against Suraj (Vijayendra Kumeria) in Udaan Udaan is a serial which have made a rapid growth in the ...

Udaan: Vivaan mistreats Imli with hatred for misconception against Suraj-Chakor

Vivaan (Paras Arora) mistreats Imli (Vidhi Pandya) with hatred for misconception against Suraj (Vijayendra Kumeria) and Chakor (Meera Deosthale) in Udaan Udaan have been creating history with it's numerous twists in ...

Vivaan (Paras Arora) misguided by Ragini against Chakor (Meera Deosthale), Suraj (Vijayendra Kumeria) and Imli's (Vidhi Pandya) pregnancy drama in Udaan There goes along a massive twist in the very own ...

Suraj (Vijayendra Kumeria) and Chakor's (Meera Deosthale) love in dark romantic moments captured on camera in Udaan Udaan is a serial which portrays a variety of drama and romance in the ...