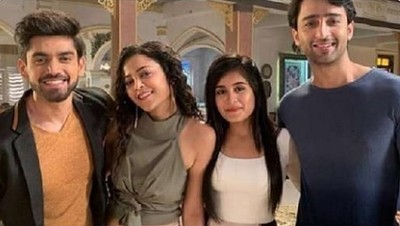 One of the most popular TV show Yeh Rishtey Hai Pyaar Ke is abruptly going off-air and the news has come out terribly shocking for everyone.

Actress Rupal Patel who plays the character role of Meenakshi Rajvansh says that when Rajan Shahi Sir broke the news, he made them shocked. Rupal Patel also confesses that she wasn’t very keen on doing Saath Nibhana Saathiya 2 because she was focusing on her present show, but this wasn’t expected that Saath Nibhana Saathiya 2 will take over Yeh Rishtey Hai Pyaar Ke time slot.

On the other hand, the main lead actor Shaheer Sheikh says that the news was a big shock for all of them. He tells about how Rajan Shahi Sir came to the set towards the evening and told them about that. Shaheer Sheikh thought that he will tell them that they have to give little more hard work in it, but more than that he left them surprised.

Now when the show is abruptly going off-air the disappointed fans have started to trend #yrhpkextension and have also begun the protest against Star Plus.

Total 4M+ fans are showing their anger and disappointment towards the TV channel Star Plus and the show producer.

The previous season of Saath Nibhana Saathiya was a hit on the screens and ran for the long 7 years.

Mishti (Rhea Sharma) life to get struggling after Kuhu (Kave...