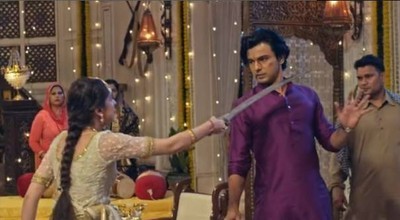 As per ongoing track of the show Vashma and Uday escaped from Farooq clutches where Vasham is blessed with baby boy.

Farooq is feeling defeated but still not leaving any chance to kill everyone on name of riots.

However Farooq gets hell furious that Abrar helped them to escape where he challenged Randhir and Amrit to kill them.

Will Randhir and Amrit able to save themselves?

It would be interesting to see what will happen next in show.

Stay Tuned with us for more exciting updates and upcoming twists in the shows.

Kyun Utthe Dil Chhod Aaye: Amrit sacrificed self to save Vashma and her baby

Kyun Utthe Dil Chhod Aaye: Uday and Brij gets into action to...