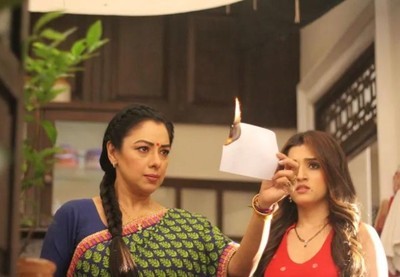 Star Plus's popular show Anupama has never failed to impress its audience with its interesting twists and turns.

Anupama and Bapuji get invited by Anuj and GK and they go to his place to meet them.

Anuj surprises Anupama by giving her the invitation to her business launch puja.

Meanwhile, Kinjal informs Anupama about the issues Samar and Nandini are facing and shows her the pictures of Rohan and Nandini.

Kinjal reveals that Rohan is creating problems for Nandini and Samar.

Samar hides about the fight

On the other side, Rohan enters the academy with some goons and attacks Samar.

Later, Anupama reaches the academy while Samar hides about the fight.

Anupama promises that she will keep them out of the trouble and also plans for Samar and Nandini's engagement.

Bhoomi-poojan, a big day for Anuj (Gaurav Khanna) and Anupam...

Anupama: Rasoi Romance! Anupama cooks with Anuj in his kitchen

Anupama: Rasoi Romance! Anupama cooks with Anuj in his kitch...

Anupama: Two Years Contract between Anuj and Anupama The up...

Anupama: Nandini to reunite with Rohan and quit Samar

Anupama: Nandini to reunite with Rohan and quit Samar The u...

Anupama: Anuj and his EX story with stern worry for Anupama

Anupama: Anuj and his EX story with stern worry for Anupama ...