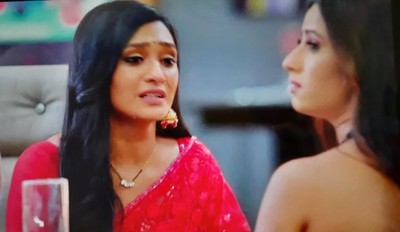 Zee TV's interesting show Bhagyalaxmi is gearing up for some intense drama and action as Laxmi is convinced of Rishi's extra-marital affair.

In spite of various warnings about Rishi's infidelity, Laxmi always ignored facts because of her undying trust in Rishi.

However, now Laxmi has found Rishi lying to her about the inauguration and attending the ceremony with another girl.

Laxmi finds out that Rishi has been lying to her about meeting whereas she sees him in the car with a girl but fails to see her face.

Shattered by the lie, Laxmi begs Malishka to help her find out about the girl and Rishi's relationship.

This leaves Malishka stunned and dumbfounded as she is aware somehow Laxmi will find out the truth.

Further ahead, Malishka consoles her and sends her back home, and reveals to Rishi about the matter.

Rishi is guilt-stricken and tensed to face Laxmi back home.

Stay tuned to know how will Laxmi handle the matter and uncover Malishka.

Bhagyalaxmi: Malishka and Laxmi compete for Rishi on Karwachauth

Bhagyalaxmi: New Twist! Celebration at Oberois Laxmi in a soup