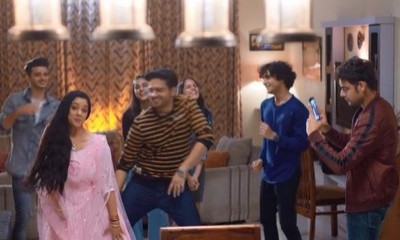 As Anuj and Anupama gets stuck due to cloud burst they cannot return back home the same day.

Destiny wants Anuj and Anupama to stay together where they find a house to shelter themselves and keep them safe.

However this house has kids partying where they force Anuj and Anupama to join them too.

While Anuj and Anupama are good dances they dont mind dancing along.

On the other side Anuj and Anupama fails to see their video being recorded and uploaded on the social handle which goes viral.

It would be highly interesting to see what happens next on the show when Vanraj Kavya Baa witnesses Anuj Anupama's one night engagement.